“Sunlight on my Hoya. So pretty…. love this. Barbara” 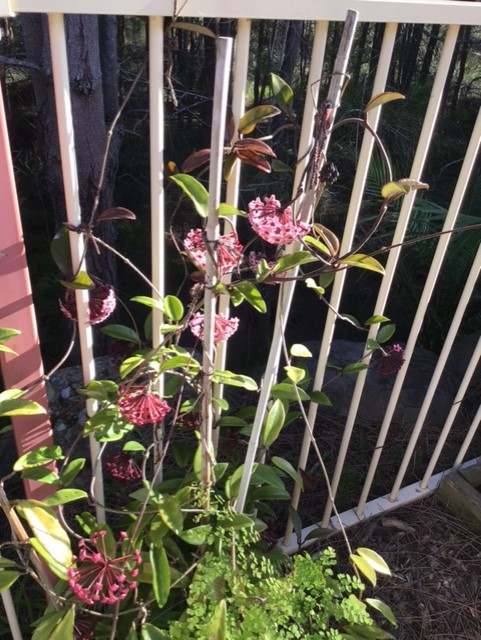 Barry has been busy with his camera again.. here are some more beauties from his garden… one complete with bees hard at work.. 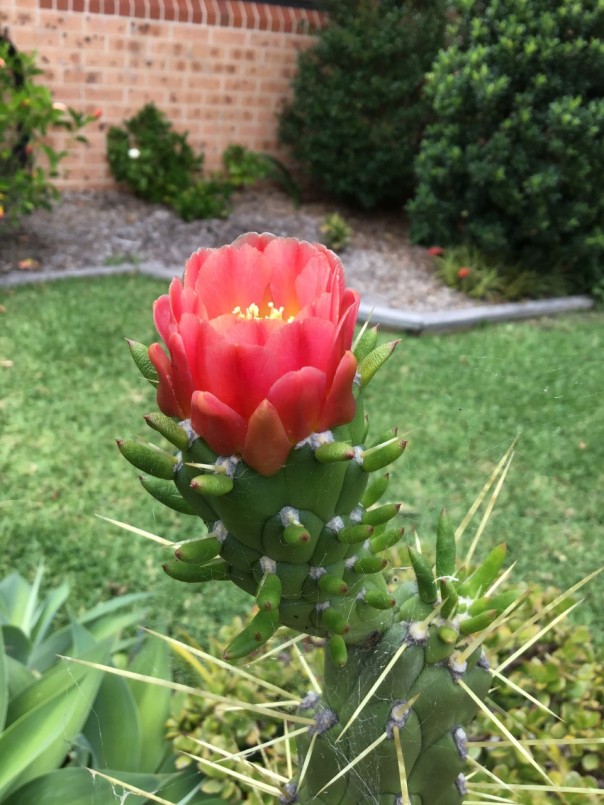 Barry sent in his own photo this time… But what is it called?????

Susan says…I agree with Jessy I think it is Stapelia leendertziae (Black bells).

Heather, a keen gardeners says..”To me it looks like some sort of cactus but I dont know”

“A bell shape flower displays in its growing season (summer) and like other Stapelias, carries with it a strong rotting meat smell. The bell like flowers are dark purple and grow up to 12.5cm wide. …Apr 9, 2019
If you Google what does Stapelia leendertzia succulent Black Bells look like, you can locate a picture which I believe Barrys’ plant to be after looking at the picture. It came with the above description and says along the way that it would not be very nice at your back door. Yuck.”

It seems that Stapelia has the majority vote..

Barry sent in this photo with the permission of Nannete , he reports that the scent is lovely.

Gloria and Robin thought these flowers in Robins garden were worth an entry online….. and indeed they are…

Barbara sent in this pic of her prize Bougainvillias…  Our gardens are looking really great at this time of the year.. 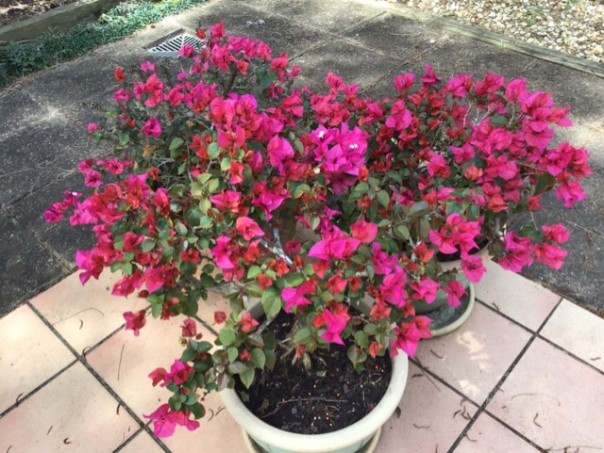 Di is enjoying the stunning display in her front garden and would like to share it.  It is Pride of Madeira with Flanders poppies. She says… “Not too many people walk around our little cul de sac so  I hope you can put it on the website for many to marvel….”.

Well we certainly can do that…

Yes, I think Spring is really on the way… Have a look at these beauties…. 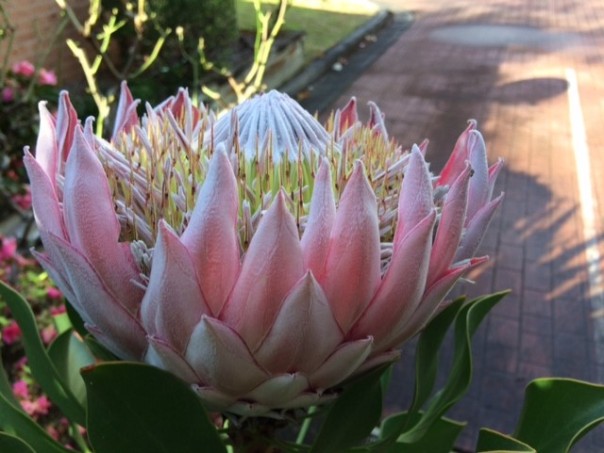 Come on all you keen gardeners, show us what you have got… just send those photos through to;

Oh dear, it seems that there are further Easter mysteries  yet to be solved….. Jill writes;

“……...There is still an unsolved Easter Bunny mystery!  This very large rabbit “dropping” was delivered in the main village on Sunday.  The person who identifies the kind bunny will receive one of these scarce large droppings as a reward..….” 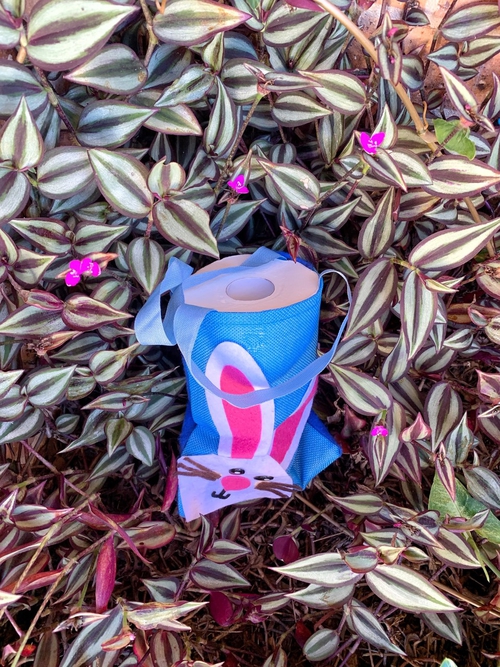 And what is this one all about????

“…….This one was discovered on my doorstep, but then simply disappeared, leaving the eggs….Jean….”

Now…  I have been told that some of you woke up on Easter Sunday 2020 and found a couple of easter eggs on your door steps.. Everyone began wondering what was behind this mysterious event.
After a very detailed investigation it has been revealed that the items on the door step were in fact rabbit droppings, but of a very special kind. We have been able to track down the culprit to the waterfront and he/she was caught redhanded and photographed with the incriminating evidence. The camera does not lie!!!! 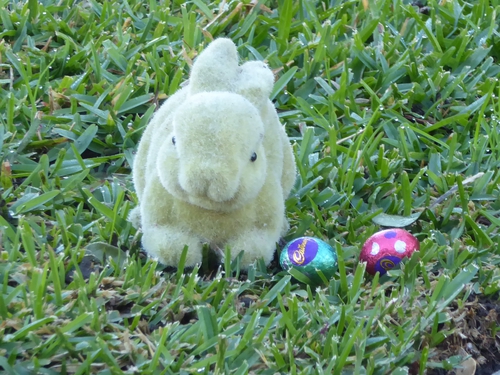 Barbara says…”These strange plants are growing in my back garden. I assume they are a type of toadstool & look like poison!”
Does anyone know what they are???

UPDATE: Jill has identified the plant as a Stinkhorn Fungi (an appropriate name..) There is plenty of information online about this plant similar to the following;

“…….. These fungi produce a dark brown to black slime containing spores on their surface, which has an intense smell of rotting meat or sewage. They are very common on wood or bark-chip mulch in gardens, and on deep litter on the rainforest floor. There are a number of differently shaped species, but all are readily recognisable by the smell of the spore slime…Cases of human consumption are not known, but the smell is attractive to dogs, and possibly cats. Deaths of small dogs have occurred. The toxins are unknown, but are thought to develop during the enzymatic liquefaction of the spore slime. They are generally gastro-irritants…….” UUUGGHHH!!!

Another nice pic from Jans garden

It must be summer, the photos of gardens are rolling in. Gloria has sent in this one of Robins favourite orchid..

We certainly do have some lovely back yards!!!

This beauty is a highlight of Neils backyard..

Rebeca has sent in some photos of her backyard orchids of which she is rightly proud…. 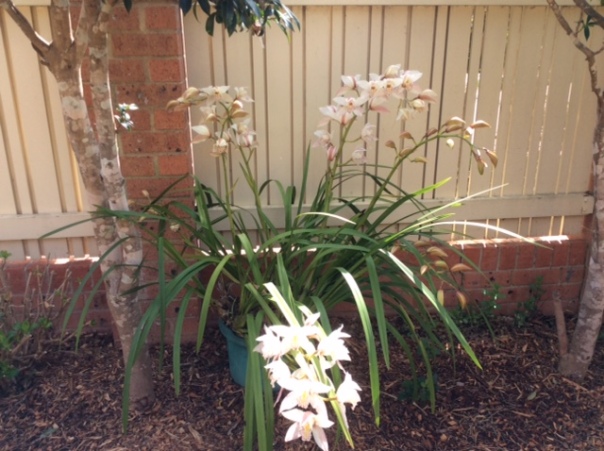 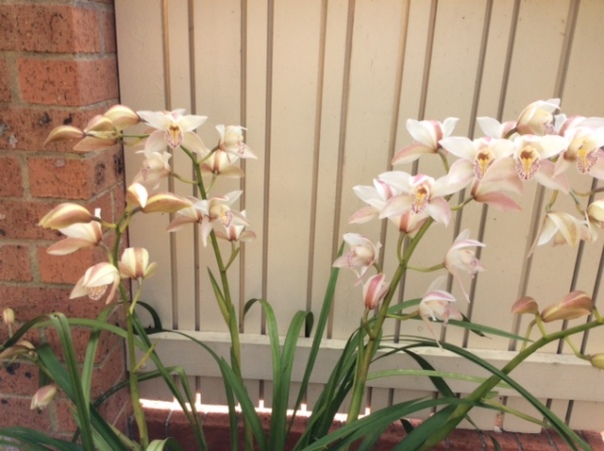 Husband, Peter, writes; Barbara is very proud of this Native Rock Orchid which she has tended faithfully over quite a few years and has finally rewarded her with a good display. 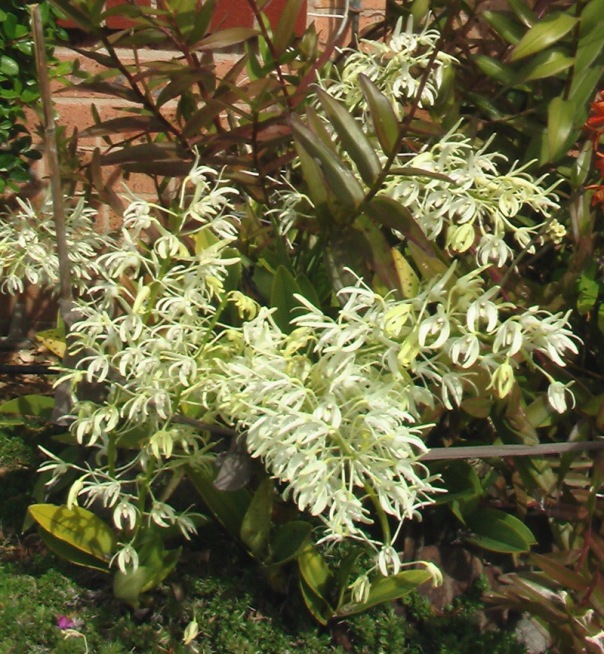 He did not give any more detail nor history but perhaps the results speak for themselves.

This is the national flower of Chile growing in my backyard.
Lapageria Rosea, commonly known as Chilean bellflower or Copihue,
grows in the forest in the southern part of Chile being part of the Valdivian
temperate rain forest flora.
Copihue is an evergreen climbing plant reaching over 10 m high among
shrubs and trees.
The vines twine counterclockwise in the Southern. Hemisphere and
Clockwise when grown in the Northern hemisphere due to the sun.
I am happy having this plant in my backyard. 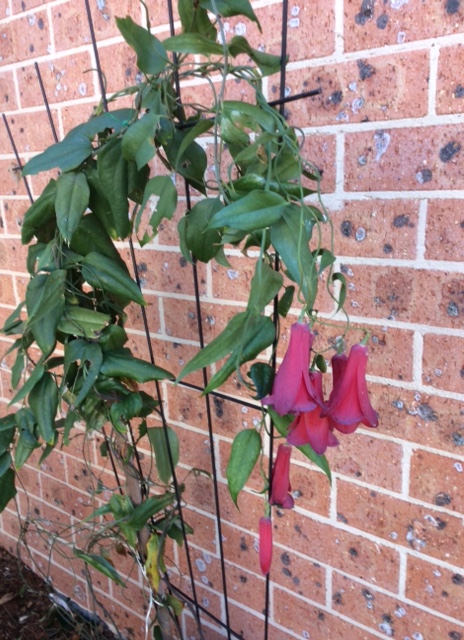 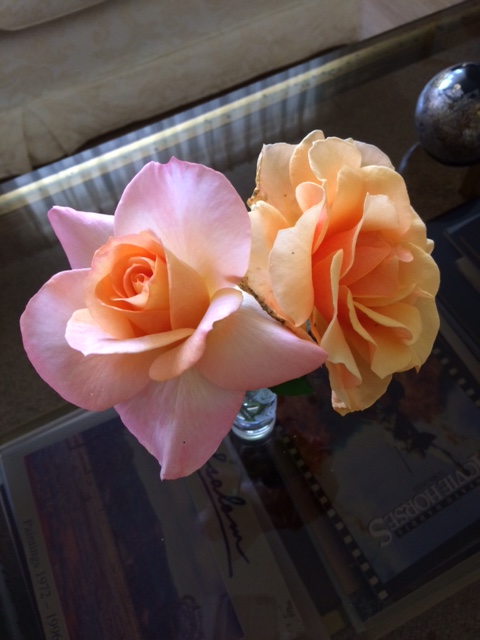 Almost my last roses of summer. Pity I can’t email their perfume!!

Bazz’s Brom is called Felicia!!!! I think he might be a rightly proud owner….

Ah, it must be spring… The flowers are out and so are some proud people with their cameras…

Its been a long, long while since we have had a new entry for this page, but Betty & Barrie really stirred up interest with this question about a display on their fence at home;

Not being a whizz at answering such questions I put it to the masses and got many responses.

But perhaps the safest answer comes from:

Hazel has submitted the following from her garden, looking good..

Ah, Spring at last… and some of our backyards and balconies are starting to show a bit of colour after a rather dull winter…. Here are a couple of Robins favourites.. Anyone else got anything to show yet??? 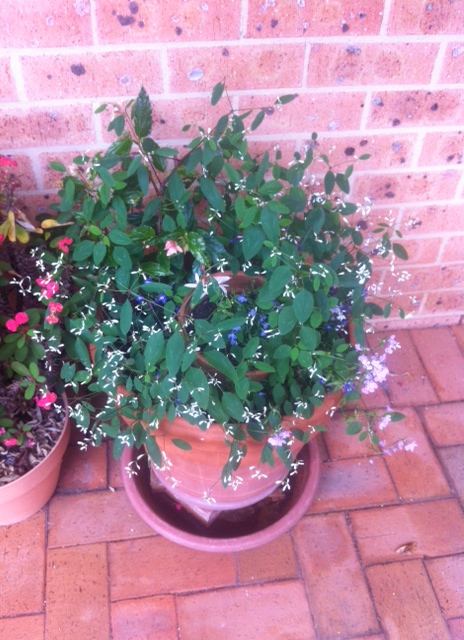 Kay Davis reports…….
I have been busy cutting some of my orchids to put in a vase as the wind is knocking them around. Just thought they might cheer up some garden lovers who find it too cold to go outside. 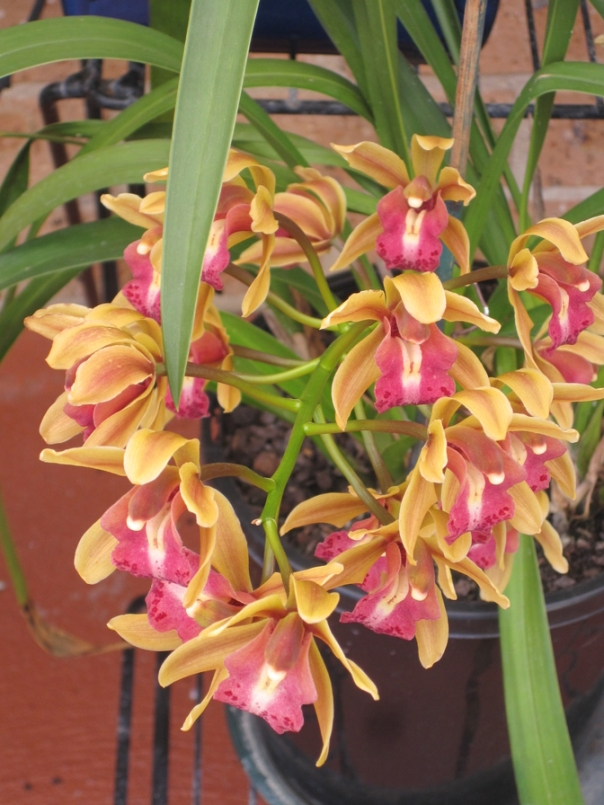 And here is the finished product…

OK, I know this page is titled Backyards and Balconies but I thought we could squeeze in some front yards as well..Particularly when Robbie McAlpine’s son, Andrew, has been hard at work and the results are to behold.

Well done Andrew, when do you start over in my area??

Here are a couple of interesting pictures from Reg and Paulines backyard..

When Pauline told me about this particular flower I thought she was having a joke… Burkes Backyard had this to say….

“Brunfelsias are evergreen shrubs from tropical America. There are about 30 species, all with tubular flowers which change colour over successive days….”  Really??

Barry and Betty sent in these 3 pics of their handiwork..

We certainly have some talented gardeners in our village

HHHMMM… Looks really good…. I wonder how many knocks on the door they will get asking for some of Clives prime mint???

Martina has submitted this photograph of her backyard sanctuary… 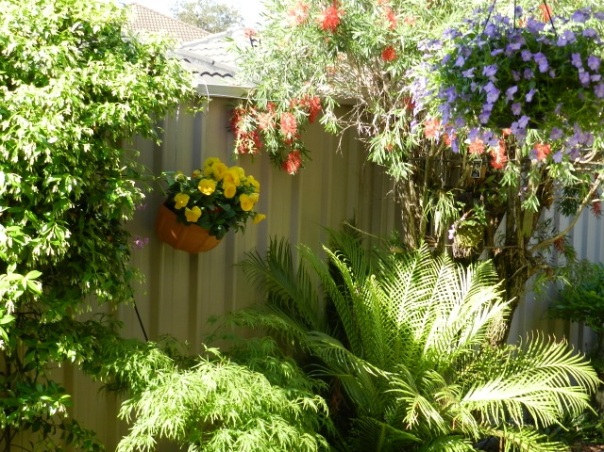 Peter reports…….. This is a photo of a freshly made spider web on our back patio. Its sticky threads attracted and held the rusty coloured gymnospores from the casuarina (“she-oak”) trees across Davistown Road, which our villa backs on to. The afternoon sunlight reveals the beautiful intricacy of the spider’s work.

By the next morning the web had gone. Obviously the spider decided that this was not a good site for a web – the dusty gymnospores had ‘killed’ the web’s stickiness.

Here is a photo of my hippeastrum plant in my back garden.

Wes has submitted the following photos of his orchids.. Well done Wes.. 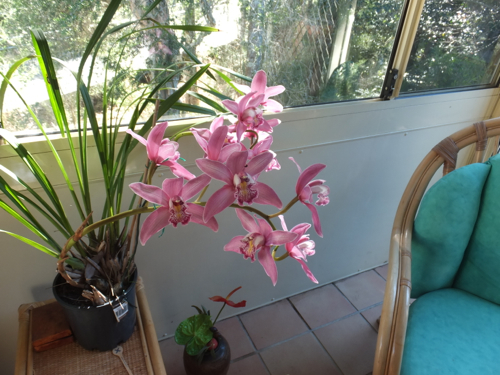 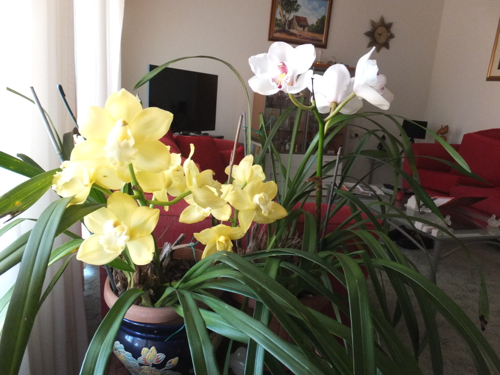 They would really brighten up any room….

Martina is the first to get her photographs onto our website. Here she has provided several photos of interesting items in her back yard. 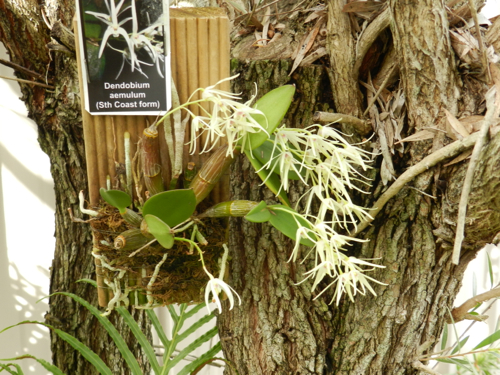 And here is Heather’s offering.. 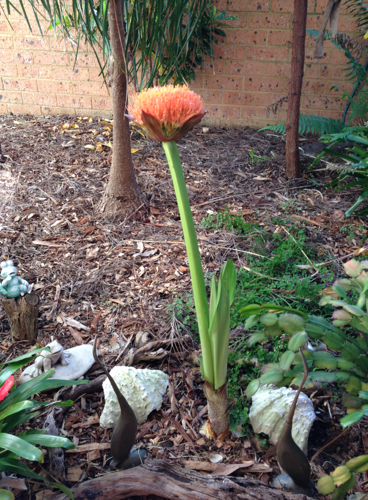 Here are Robin’s Violas. They are grown in a pot. 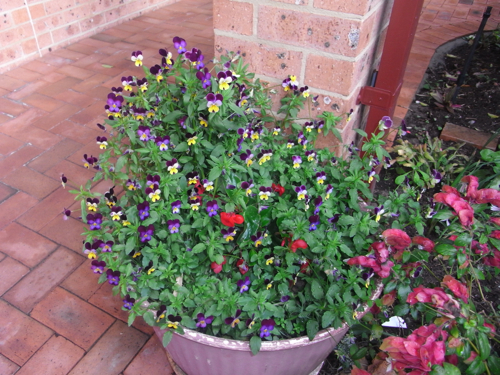 It is said that she is a real “greenfingers”.

1 thought on “Back Yards and Balconies”