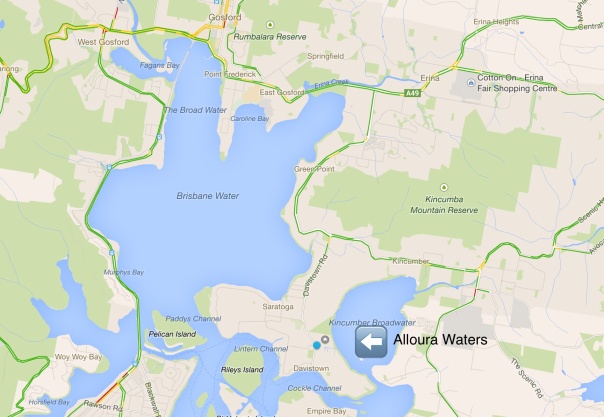 There is a good range of convenient shopping facilities that can be used by village residents. Our village is marked by the blue dot.

A five minute stroll from the village down to the waterfront finds a small group of shops perhaps more useful for quickly picking up some bread, milk and a paper or a perhaps a quick coffee rather than any large amount of shopping .

The general store operates a number of agencies for lotto, dry cleaning, etc. They sell liquor, fishing supplies and a small range of newspapers and magazines. There is a Thai eat in/takeaway, a good “Fish n Chip” takeaway  and  just around the corner the Little Tea Pot is a nice place for a light lunch or just a coffee.

More a good walk than a stroll, but just a few minutes drive up and over a hill is the Saratoga shopping strip. There is an IGA store, bakery, newsagent, doctors surgery, pathology collection, chemist, dental surgery, a Thai eat in/takeaway, jewellers, hairdresser and a general cafe which also serves takeaway fish & chips.

The chemist is the nearest to the village and provides residents with a drop off service if required. There is a box in the village lounge where scripts can be placed for collection by chemist staff and they will later return the medicines to the residents homes.

Across the road there is an independent petrol station and vehicle workshop.

Further afield again is the Kincumber shopping strip. It is walkable but only by the fit. Most residents drive or take the village bus but some cycle or walk along a waterfront path on a nice day. There is a very limited public bus service directly to these shops. There is a large Coles supermarket, reputed to be the largest Coles supermarket anywhere on the Central Coast. It is certainly large enough for the weekly grocery shop. The strip also has a fruit and veg, chemist, butcher, two travel agents, a post office, optical, takeaway cafes, bakery and several others. There are a good range of bank ATM’s in the foyer.

Across the road there is a McDonalds, Kentucky Fried Chicken, Dominoes Pizza, a car wash, and a Shell petrol station. The Kincumber Hotel is nearby.

A short drive further along  past the Kincumber shops, and after turning right at a large roundabout, you will come to a Mitre 10 store which is the nearest hardware store. This area also contains other “tradie” type outlets such as plumbing supplies and various vehicle repair firms.

Heading towards Gosford, just before Green Point is an Aldi store with the usual range of Aldi products.

A little further along the road is the Green Point shopping strip. This has a smaller Coles supermarket, butcher, bakery, newsagent, discount chemist, doctors surgery and several others.

Erina Fair, perhaps a 15 minute drive away, is a very large shopping mall which would be the equal of many large suburban Westfield type malls. It has the full range of tenants such as Hoyts Multi screen movies, Myers, Kmart, Big W, supermarkets, banks, food halls, clothing shops, etc.

Within the general Erina area, are a full range of homemaker type shops such as JB HiFi, Harvey Norman, Forty Winks, The Good Guys, etc. There is also a NSW Govt Service Centre for motor registration, drivers licenses, etc

Just before reaching the Erina homemaker store area you will pass a medium sized Bunnings store which is the second closest hardware store after the Mitre 10 store at Kincumber.

At East Gosford there is a small shopping strip with a hotel, restaurant, cafes and a range of smaller shops.

Gosford main town CBD has a limited range of shops. There is a medium sized shopping Mall as well as strip shopping..

Over on the western side of Gosford there is another large “homemaker” group of facilities which include Spotlight, Office Works, Domayne, A Mart furniture, Anaconda Camping store, a very large Bunnings hardware store, etc.

A 30 minute drive to the north at Tuggerah is a Westfield shopping Mall and many “homemaker” stores.

A 30 minute train ride south from Gosford is a very large Westfield shopping Mall at Hornsby. The Mall is an easy stroll from the train station and there are many other shopping opportunities surrounding it.

In summary, within a 15 to 20 minute drive from the village there is a full range of shopping facilities equal to any that will be found in the city.

If you cannot drive, our village bus does shopping runs three mornings every week stopping at Saratoga, Kincumber and Erina. It will extend to the Gosford CBD on request. There is also a public bus that passes just outside of the village each hour during the day and it serves the Saratoga shops, Erina Fair and the Gosford CBD and railway station.

The public bus does not reliably service the Kincumber shops Because it has a very limited timetable.