Another successful bowls Xmas Dinner function was held over in the Centre on 11 December 2019 when 35 or so bowlers turned out for the annual event.

First order of business was a few rounds of silly bowls where Barbara and Kevern emerged as the nights champions.. 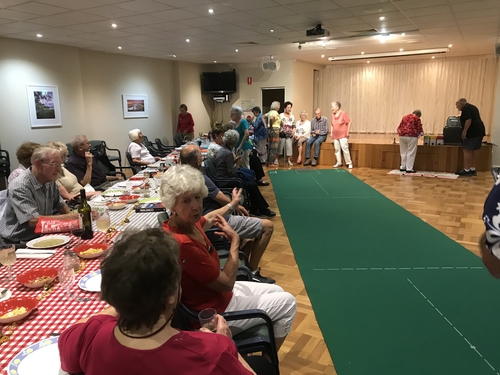 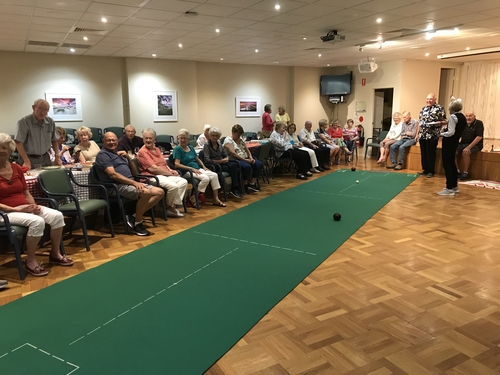 Of course the main reason for gathering at this time of year was to EAT.. several members weaved their usual magic and a miraculous rang of eats and drinks appeared. 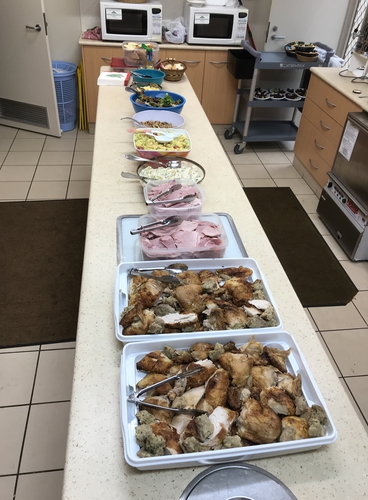 Thanks go to the organisers and helpers…  Another fun night was had by all..

It is now a tradition for the indoor bowlers to stage a “Xmas in July” event each year and this year was no exception. Around 33 bowlers came along for a bit of fun bowling and a good feed.

While some of the organisers were hard at work in the kitchen preparing the food others enjoyed a game of “silly bowls”. They are not very skilled at bowling backwards or “cacky handed” with most bowls going off the mat….

Some missed out on the bowling fun when the kitchen announced “Come and get it” in true Ma and Pa kettle style. 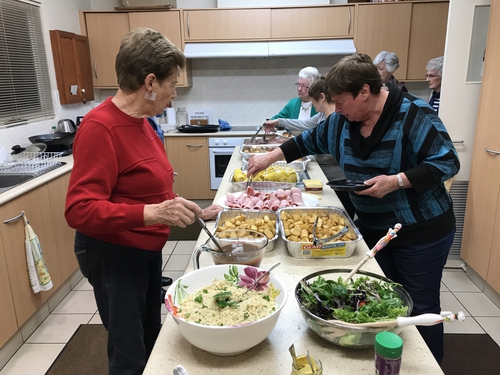 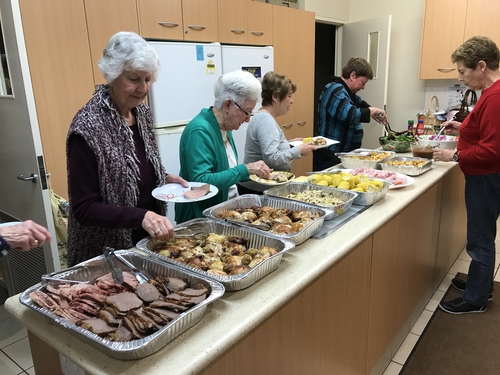 What a feast!!!! Three meats, hot veggies and salad. Followed up by a range of sweets including Xmas pud and custard of course. And there was unanimous acclaim for Jans delicious home made Rocky Road confectionary.

This is about the quietest that the bowling group have ever been as they enjoyed their meal.

There was enough of the “silly bowls” competition completed before the meal to select two lucky winners.

Bev was successful in the ladies section while Jim was the winner in the mens section and each received  a valuable prize!! 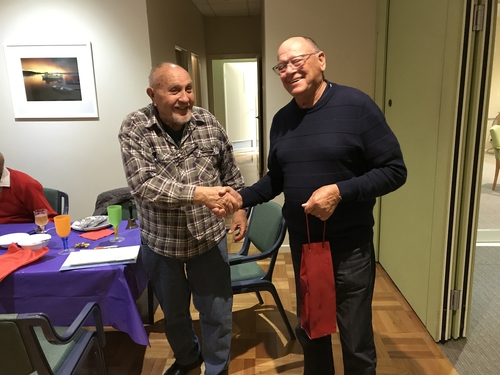 So once again, a big thank you goes to the organisers of another successful Xmas in July

See you all again next year!!!!

There is no doubt that the indoor bowls group like a good party. They had a Xmas in July event and have recently returned for a Xmas in December event. There were 37 bowlers that turned out for this annual Xmas dinner.

After a few rounds of “silly bowls” games they all got down to some serious eating and drinking. 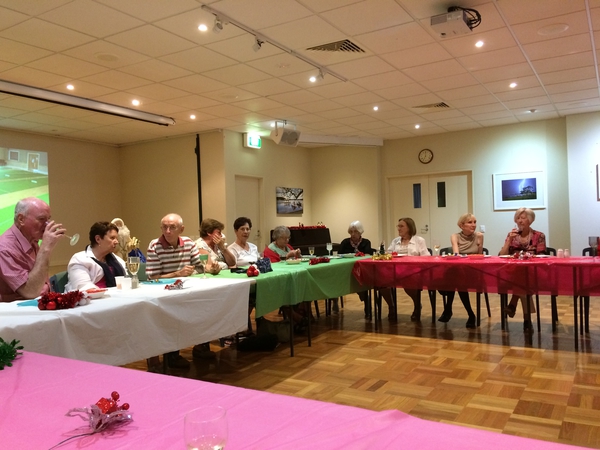 The organisers really did a good job and there was an abundance of food.

Thanks to Richard and Anita, Min and Keith, Leonie and others who helped out to make it another successful night.

See you all in the new year

A yearly event, around 30 indoor bowlers gathered for a Xmas in July dinner in the Centre. on the 4th July. 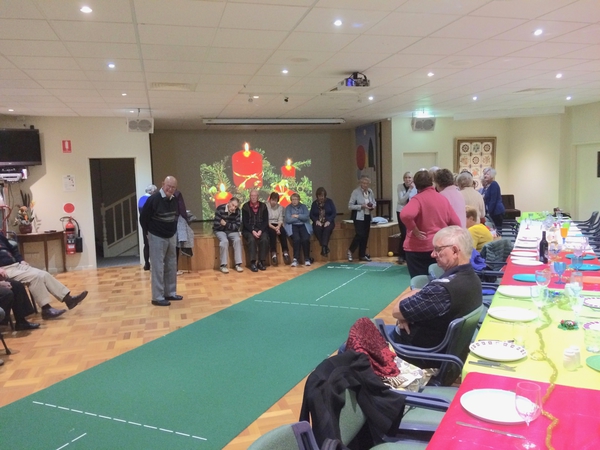 First of all, there was a knock out competition of “silly bowls” after which a scrumptious meal of chicken, cold meat cuts and salad was enjoyed. Eat, drink and be merry was the order of the day. 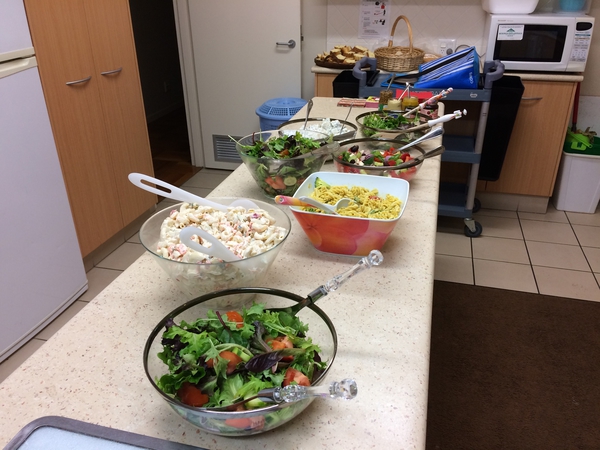 The highlight of the night was of course the awarding of prizes to the winners of the knockout competition earlier. 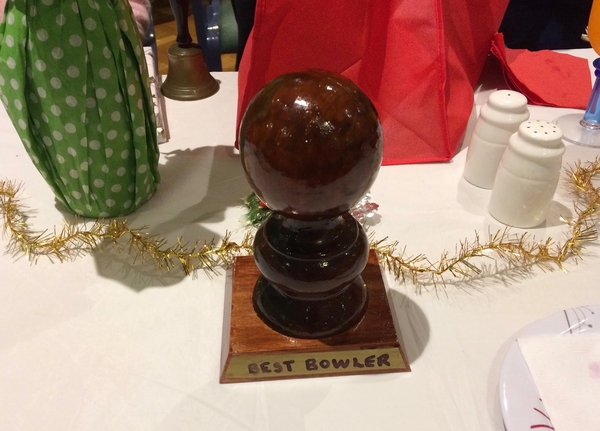 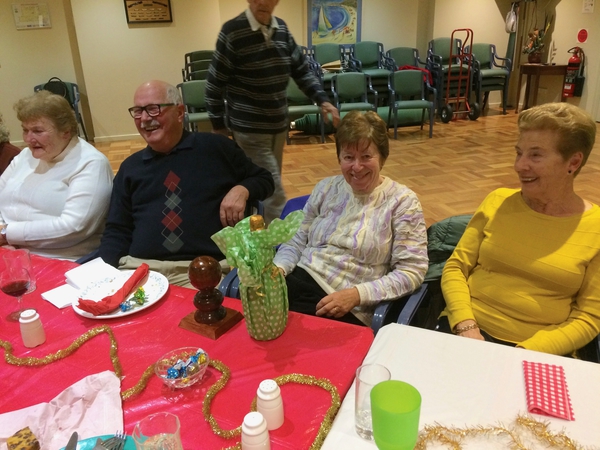 Betty was our first prize winner.

Catherine was a close second.

And Isobel also won a prize

Once again a great night with much silliness, a few laughs and a good feed.

Thanks to all those who helped out

2018 saw the first Living Choice Intervillage Bowls Competition and it was held at the Davistown RSL. This initial competition, sponsored by LCA, was between Broadwater Court and Alloura Waters village. The day was considered a great success and those present endorsed the idea of a repeat competition each year…

On a magnificent May day in 2018 Alloura Waters and Broadwater Court villages did battle at bowls at the Davistown RSL. 72 people took part – 18 of whom had never bowled before.
The organisers, Barry and Richard from Broadwater Court and Garry and Don from Alloura Waters, made the whole event run smoothly. Tim Bentley, General Manager, Central Coast and Qld for LCA, not only presented the prizes but also took part, as did 12 other LCA staff members – 6 from each village.
Alloura Waters were the winners on this first occasion and have bragging rights for the next 12 months. On a call of voices there was a very strong positive response to Tim’s enquiry as to whether it should be done again.
It was a very good fun event, as the photos will show.

It was great to see staff and residents socialising together. They certainly added to the fun of the morning. 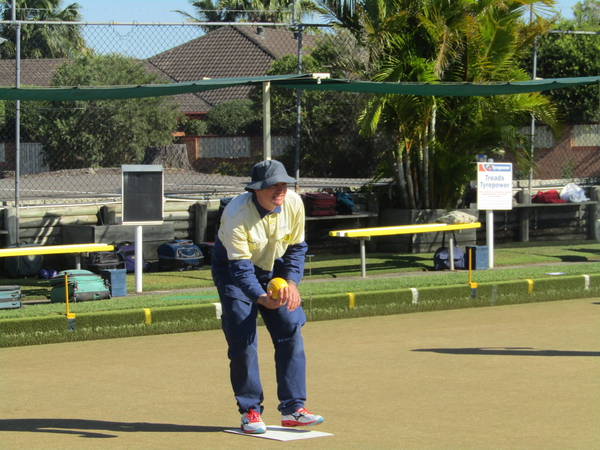 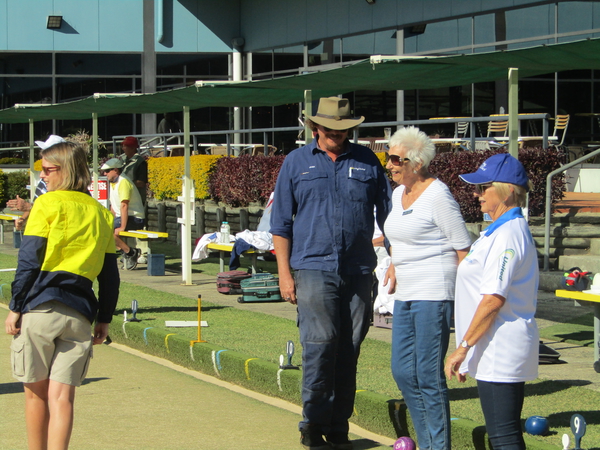 Alloura Waters Village Manager, Dale, was especially pleased with his performance even though Alloura Waters resident, Jean, claimed full credit for coaching him so expertly.

Some of the residents had never bowled before….. SO……. some coaching was in order.

Then it was time for residents to do some serious bowling. 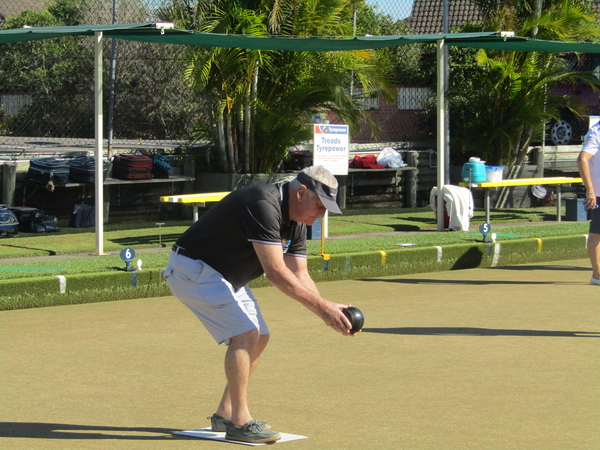 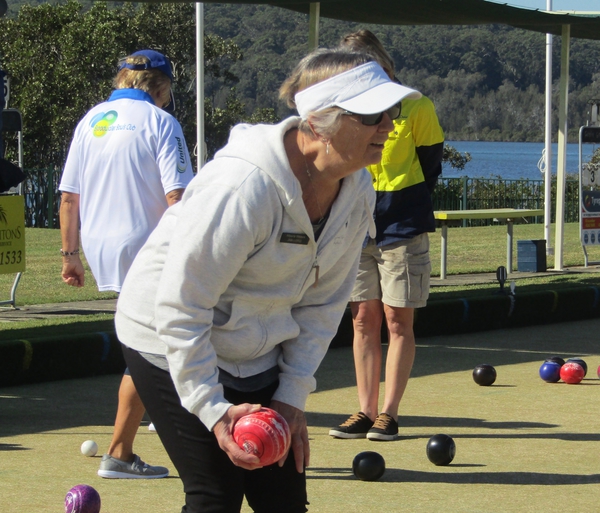 While others just enjoyed a day of resting and watching. 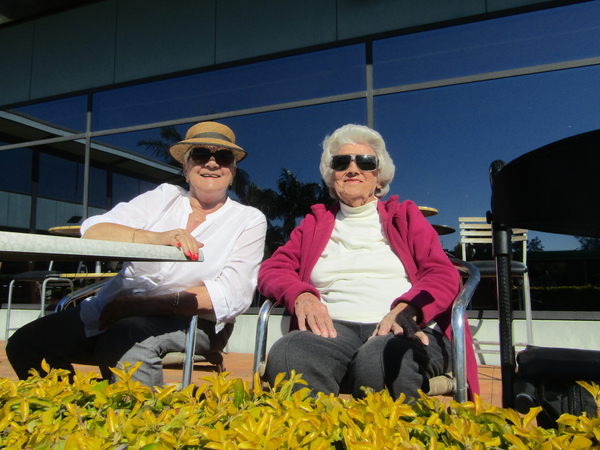 All of that activity and excitement sure makes one hungry so it was inside for lunch. 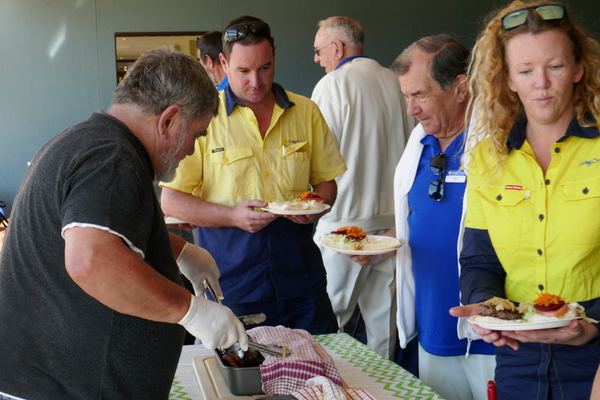 And of course some suitable refreshments. 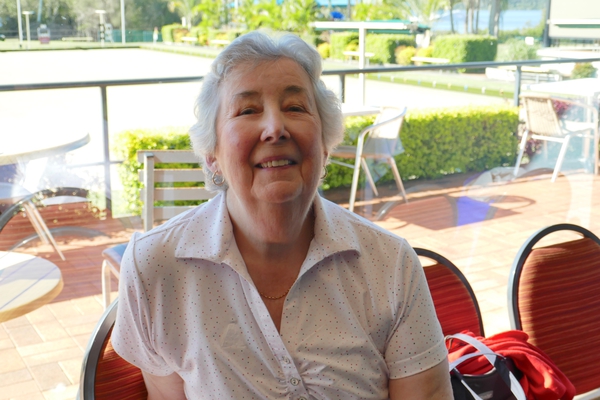 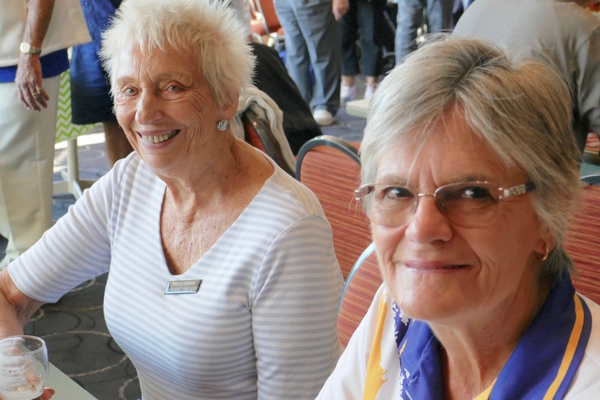 Then it was time for awarding of prizes by Tim…… 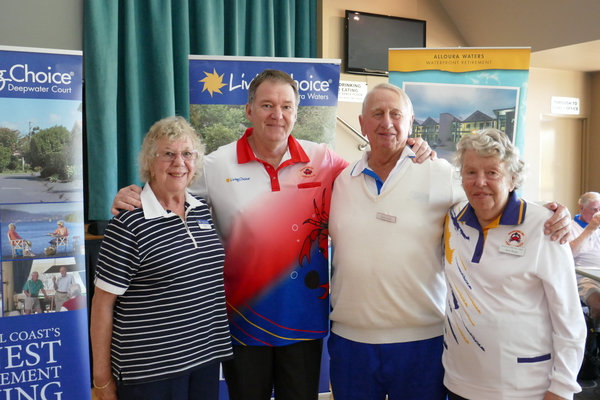 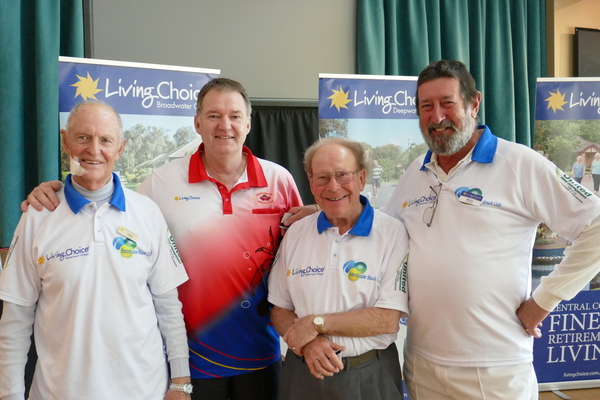 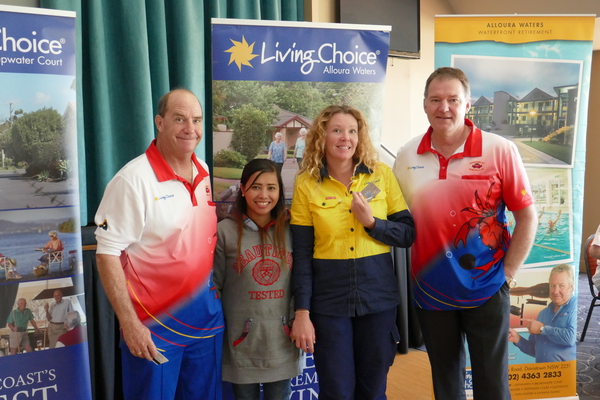 But the most coveted prize was the one awarded to the winning village.

But congratulations to all involved, see you again next year..

Over 30 indoor bowlers gathered in the Centre on the 29th November 2017 for the annual Indoor Bowls Xmas Party.

First up was a game of “silly bowls” (left hand only, etc) which tested the skills of everyone.. 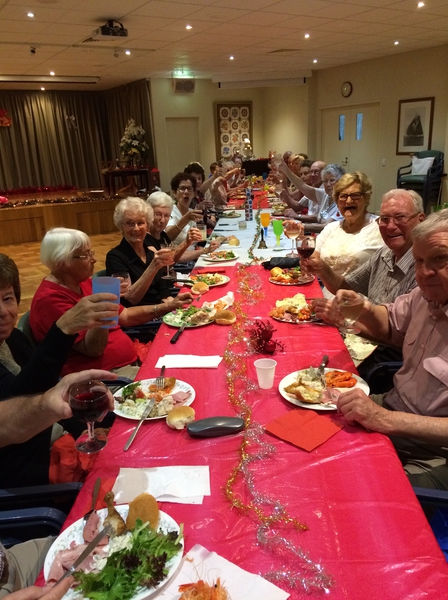 Then on to a delicious meal, the prawns were a big hit. And of course a tipple or two…

After the meal Keith “tickled the ivories” and got a few up dancing led by Gloria.

And after a few more “tipples” Beth was judged to be in fine voice..

A most enjoyable night, thanks to Richard and Anita, Keith and Min, and to everyone else for all of their hard work and  making the night a success..

Indoor bowls will commence again in 2018, on Wednesday nights at 6:30pm to 8pm. New bowlers are always most welcome.

And so it was that on the 28 November 2016, the Alloura Waters Indoor Bowls Group of some 30+ hungry soles gathered for their annual Xmas dinner in the Centre.

Gloria, Barbara, Robin and her lovely visiting Grandaughter were hard at it during the day preparing a feast for us all. A number of others came along during the day to help set up both the venue and the food.

There was chicken, ham, boiled potatoes and a variety of salads to feast upon followed by Watermelon, Xmas cake and some after dinner chocolates.
The evening kicked off with a short game of competition bowls with the winners to be announced later, but soon it was time to eat. 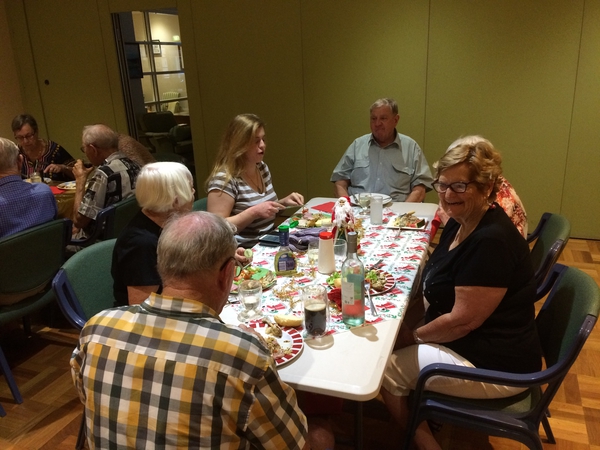 Richard announced the winers of the bowls competition and presented a small prize to each of them..

To finish off the evening Keith gave us a couple of resounding tunes on the piano.
Some might claim that it was the amount of wine that was consumed but we all failed miserably when a few couples took to the dance floor and no one could remember how to do any of the dances. It was suggested that we should all attend dance classes next year.

But a great fun night was had by all, with much laughter and the company of good friends..

Thanks Folks, see you all next year.

On the 6th March 2015 a busload of Alloura residents, keen bowlers all, headed off to Glengara Retirement Village to our north for an inter village bowls day which was organised by Clive and Gloria.

Unfortunately, the competition was a little too strong for our team but the hosts looked after our bowlers well, including the provision of a delicious lunch.

Our people were most impressed with both the Glengara bowling green and the size of the Glengara community centre and the facilities within.

So even though the bowls results did not go our way this time a great day out was still had by all.. 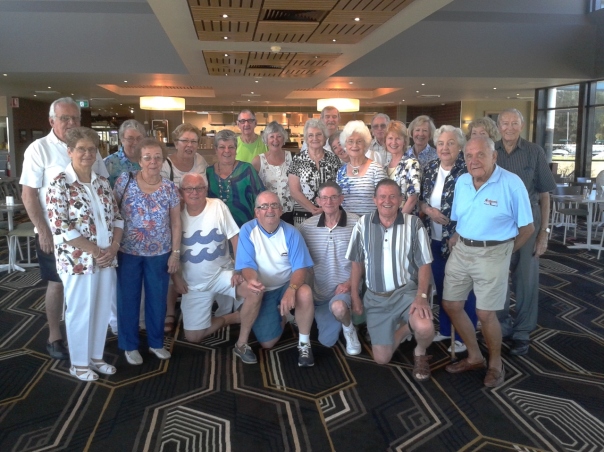 Brian recently celebrated his 70th birthday in style with family and many of his village friends at a surprise buffet dinner in the community centre. 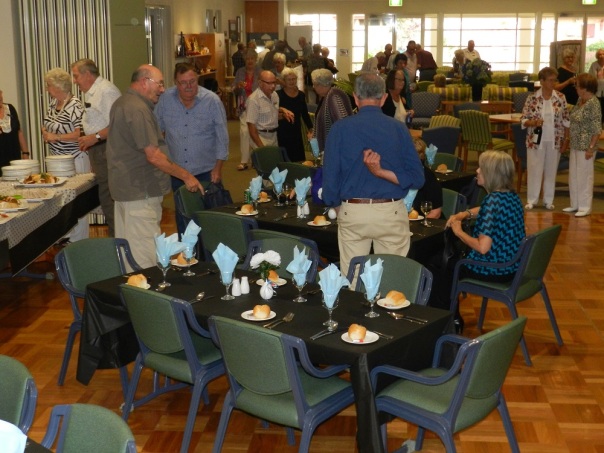